When I left Amsterdam, I did so on ICE, the Inter-City-Express train.  For those of you who don’t know, these trains are incredibly fast.  We were traveling at around 270 km an hour.

The other cool thing about this form of transportation is that it gives you some time to really get to know your fellow passengers while not being as cramped as plane.

I’ve really begun asking myself if there is a rhyme and reason to what is happening to me as I travel because I keep meeting people who seem to be connected to my life already in certain ways.  Maybe it’s only a matter of perspective.  I haven’t decided what I believe yet.

Anyway, for the first part of my journey from Amsterdam to Frankfurt, I sat with a family, Mo, Claudia, and their daughter Lucca.  Both Mo and Claudia are teachers in Germany, and they had just taken a weekend vacation to Amsterdam and were heading back to their home town–Dortmund. 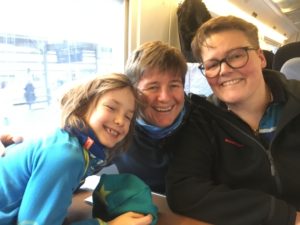 From left to right: Lucca, Mo, and Claudia are the first people I met in Germany.

First, let me say that it was a pleasure to sit with this family.  There was a lot of love evident in their interactions with one another.  Lucca played video game pinball, and then her mother, Mo, gave it a shot and beat her daughter’s record.  Lucca went back to work to reclaim her throne as pinball wizarding queen.  There was a lot of teasing and laughing and gamesmanship, but it was all tempered by sweet glances of adoration.

It was nice to see Mo and Claudia interact with one another.  When I told them I had been traveling through Scotland, Claudia reminisced on their Scotland trip together.  Mo was in the latter stage of her pregnancy with Lucca and faced some challenges with the Scottish weather and landscape.  I told them that they should definitely go back.

Mo also told me that primary school teachers have to be experts in a least three subject areas.

Lucca is learning English in her primary school.  Mo said that she dedicates about 4 hours per day learning the language. They believe that it’s important for Lucca to learn English, a belief that is not limited to German schools and families.  I’ve met people from all over the world who are learning English or are already fluent speakers.

Being teachers who share the same works schedule has been great for Claudia and Mo, who love to travel.  They’re currently planning on returning to Thailand for a scuba diving trip.  And they’ve been to America a number of times.

“I’ve been to America three times.  And I’ve enjoyed my experiences with Americans,” said Mo.

They were the second group of people to offer me a drink in my travels.  They were carrying a six pack of Dutch beer.  As we shared a drink, they gave me suggestions about places to see in Germany.  They said that Berlin was an amazing place to visit.

When it came time for Mo, Claudia, and Lucca, to get off and switch trains and we were saying goodbye, Mo smiled and said, “You should drink some German beer.”

I felt lucky by my first interaction with the people of Germany, but I was about to meet another great person and didn’t even know it.

As the family departed, Chris from Frankfurt stepped onto the train and sat down next to me. 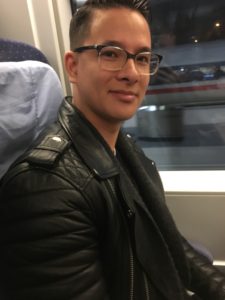 Chris talked to me about his home, Frankfurt, as well as about his travels throughout Europe and the US and Canada.

Chris works public relations for an IT firm.  When I heard that, we talked a little about Photoshop, In-Design, and Illustrator.  He laughed and said that people tended to think he was in his twenties but that he was actually in his early thirties.

“I guess I don’t appear to age because of my Asian blood,” he said laughing.

Chris’s mother fled to the US from Vietnam during the war.  She eventually moved to Germany for her work, and that’s where she met Chris’s father.  Chris was born in Frankfurt and grew up there, but he said that he has family in Canada and in the US.

“I really love the people in Canada.  They’re very friendly there.”

He’s even considered moving to Canada, but he’s got his parents and friends and work in Frankfurt.

When we pulled into Cologne for a stop, Chris pointed out some of the sights from the train.  He also suggested that I visit Copenhagen and Helsinki.

“I’ve been to Finland more than ten times.  It’s quite beautiful.”

I told him about the blog and what I was doing.  I told him a little about my time as a teacher.  We talked about living with purpose.

As we pulled into Frankfurt, he told me a little about his home.

“Frankfurt is like the mini New York of Germany.  The river is the Main.  They call it Manhattan like Manhattan.  It’s the only city in Germany with lots of sky scrapers.”

As we got of the train (I was going to switch to the train that would take me south to Kaiserslautern), we said goodbye.

While I did see some of the countryside and cities in Germany as I traveled the ICE from Amsterdam to Frankfurt, what I really appreciated was the glimpse into the hearts of the German people I met along the way.

One thought on “Finding Warmth on ICE”